Running around in a dungeon, looting chests, killing orks and goblins; this is but a normal day in the life of a Jack. Being a rogue, a mage or a knight seems fun at first, but it gets boring quite fast...

Well, how about a way to spice things up for a change ? What if every single of your actions was a polar choice, either do it or don't ? What if your life could only be controlled by agreeing or denying to a sequence of actions that goes around right before your eyes ?


Reach the end, it only requires a single fingertip.
Welcome to Jaded Jacks !

How to play: Exploration phase

During the exploration phase, holding down a key will make you move in the direction pointed by the arrow circling your character.

Items are automatically picked up and used if using it would not result in wasting its effects.

To open up golden chests, you will need a golden key.

To open up doors, you will need a blue key.

To open up red doors, you will need a red key.

How to play: Battle phase

Battles are turn-based, but choosing a skill to perform is a time-based action.

When it is your character's turn to play, press any button to start filling the casting gauge at the bottom-left of your screen. Holding any button down while the gage fills past a bar will mark a DOWN input, while not holding anything will mark an UP input.

Once a skill has been selected, an arrow will start pointing toward the potential targets of your skill. Simply press the button when the arrow is in front of the desired target.

The bottom-right of the battle screen displays the skill available for the current character. Try matching them to execute a skill!

Items and their effects

There are three types of items you can stumble upon.

- Equipments are associated with each of your player's characters and will provide a boost in one of four stats: attack, defence, magic or speed. They will also boost your maximum health and mana by a small amount.

- Regenerative items can either heal you or restore part of your mana. IF a character's health or mana is already at its maximum, it will increase a little bit. Finding a phoenix's feather will bring your defeated allies back to your party, even stronger than before!

- Keys are used to unlock chests and doors. Each colour of key unlocks a different set of things.

I really like the concept, especially since I got one of those large fluffy enter buttons and I can play this by mashing the button, which is pretty fun.

However, there are so many bugs its hardly playable. On my first run, the dungeon was generated in such a way that there right at the beginning there were two chests blocking the only two paths and no keys to find anywhere.

When I restarted the game I had more luck with generator, however at some random point on level 2 (after opening a door) I was unable to interact with anything, enemies, items, even the exit from the dungeon, I would just pass through everything without activating events...

If you have the time, please fix the game a bit, I really liked it. I'm assuming the plethora of bugs is most of the reason this isn't more popular (judging by the empty comments section).

Hey, thanks for playing our game and taking time to leave a comment! We're glad you enjoyed it despite the bugs.

The game was made in under a week for the One Button Jam 2016 so we didn't have enough time to debug and polish it. That's also the reason why there is not much content. Sorry about that.

Since we didn't really know how to expand the game, we stopped working on it. Delca and I went our separate ways, so I'm afraid there won't be a fixed or extended version anytime soon. 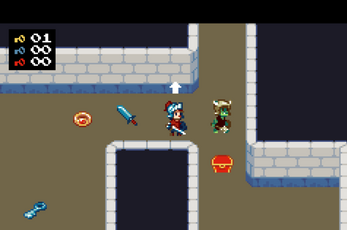 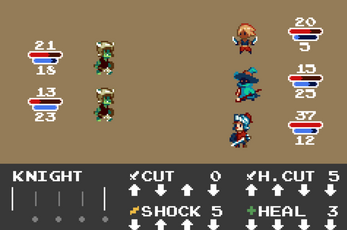